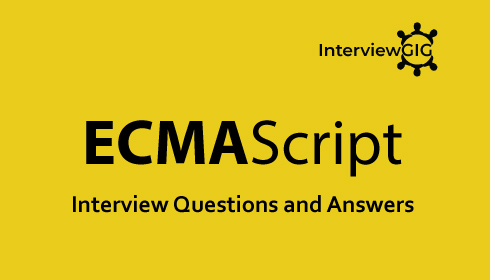 ECMA stands for European Computer Manufacture Association. ECMAScript (ES) is a scripting language specification standardized by ECMAScript International in ECMA-262 and ISO/IEC 16262. It was created to standardize JavaScript, so as to foster multiple independent implementations. JavaScript has remained the best-known implementation of ECMAScript since the standard was first published, with other well-known implementations including JScript and ActionScript. Coders commonly use ECMAScript for client-side scripting on the World Wide Web, and it is increasingly being used for writing server applications and services using Node.js. There are eight editions of ECMA-262 published. Present Work on version 8 of the standard was finalized in June 2017. ECMAScript provides the rules, details, and guidelines that a scripting language must observe to be considered ECMAScript compliant.

ECMAScript: A language standardized by ECMA International and overseen by the TC39 committee. This term is usually used to refer to the standard itself. Sun (now Oracle) had a trademark on the name “JavaScript” (Microsoft calling its JavaScript dialect “JScript”). Thus, when it came to standardizing the language, a different name had to be used. Instead, “ECMAScript” was chosen, because the corresponding standard is hosted by Ecma International. In practice, the terms “ECMAScript” and “JavaScript” are interchangeable. If JavaScript means “ECMAScript as implemented by Mozilla and others” then the former is a dialect of the latter. The term “ECMAScript” is also frequently used to denote language versions.

ECMA-262: The Ecma International (a standards organization) has created the ECMA-262 standard which is the official specification of the ECMAScript language.

ECMAScript 5 (ES5): The 5th edition of ECMAScript, standardized in 2009. This standard has been implemented fairly completely in all modern browsers.

ECMAScript 7(ES7): The 7th edition of ECMAScript 2016, was finalized in June 2016.New features include the exponentiation operator (**), Array. Prototype. includes (not to be confused with ClassList.contains).

ECMAScript 8(ES8): The 8th edition of ECMAScript 2017, was finalized in June 2017.it includes await/async, which works using generators and promises.

What is the relationship between JavaScript and ECMAScript?

JavaScript is a scripting language most often used for client-side web development. It was the originating dialect of the ECMAScript standard. ECMAScript and Live Script are other names for JavaScript. The current JavaScript that is supported in browsers is ECMAScript

Babel is the one of the most popular JavaScript transpiler and becomes the industry standard. It allows us to write ES6 code and convert it back in pre-Es6 JavaScript that browser supports.

What is a Promise?

A promise is an object that may produce a single value sometime in the future: either a resolved value, or a reason that it’s not resolved (a network error occurred). A promise may be in one of 3 possible states (fulfilled, rejected, or pending). Promise users can attach callbacks to handle the fulfilled value or the reason for rejection.

Webpack allow you to run an environment that hosts babel. Webpack is open source JavaScript module bundler which takes modules with dependencies and generates static assets representing those modules.

Traceur is a JavaScript. Next-to-JavaScript-of-today compiler that allows you to use features from the future today. Traceur supports ES6 as well as some experimental ES.next features.Traceur’s goal is to inform the design of new JavaScript features which are only valuable if they allow you to write better code. Traceur allows you to try out new and proposed language features today, helping you say what you mean in your code while informing the standards process. JavaScript’s evolution needs your input.

What is Reflect API?

Reflect is a built-in object that provides methods for intercept able JavaScript operations. The methods are the same as those of proxy handlers. Reflect is not a function object, so it’s not constructible. Full reflection API exposing the runtime-level meta-operations on objects. This is effectively the inverse of the Proxy API, and allows making calls corresponding to the same meta-operations as the proxy traps. Especially useful for implementing proxies.

What are template literals in Es6?

Template literals are the string with embedded code and variables inside. Template literal allows concatenation and interpolation in much more comprehensive and clear in comparison with prior versions of Ecma script.

How to create a JavaScript class in ES6?

In Es6 you can create a class using the Class keyword. Below is sample JavaScript class in ES6.

What is the ES6 Map feature?

The Map object is a simple key/value map. Any value (both objects and primitive values) may be used as either a key or a value. Syntax [key, value]. e.g.

BabelJS is the most popular transpiler that transforms new JavaScript ES6 to Old JavaScript ES5.BabelJS makes it possible for writing the next generation of JavaScript today (means ES2017).BabelJS simply takes ES2015 file and transform it into ES5 file. Current browsers versions can now understand the new JavaScript code (ES2017), even if they don’t yet support it.

What are the new features of ES6?

What are the new feature of ES7?

ECMAScript 7 is the next evolution of the ECMA-262 standard. Some features are

What are the new features of ES8?

What are the new features of ES9?

What are the new features of ES10?