Could you imagine a day without your smart phone, not only it but it is making the users also smarter day by day. Amazing  you can surf the internet ,listen to music and text your friends with something that fits in the palm of your hands .None of the things would be possible without chemistry and every time you use your smartphone you are putting chemistry into action.

When shopping for a smart phone the single most important feature that people look for is display. The following method is used where potassium salts, sodium ions in a glass migrate large number of potassium ions are squeezed. This compresses the glass and makes it strong and finally Indium Tin oxygen puts the touch in touch screen. Currently, gorilla glass is used in many smart phone devices. Gorilla Glass is composed of an oxide of silicon and aluminum also called aluminosilicate glass along with sodium ions.

In hands behind a Touch Screen

Because our skin is electrical conductor and primarily due to the combination of salt and moisture on the fingerprints creating an ionic solution, a tiny bit of electricity through us every time you use the touch screen on your phone 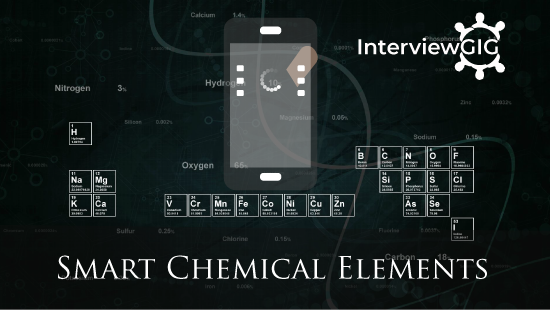 The Various Chemical elements used in different parts of Smartphone are:

Major Chemicals used in the Screen

Smartphone is not only for communication devices but also used for news ,pictures, videos, tv, and information, function as personal media devices for entertainment. That is also used as a means to express their individuality. It is used to negotiate independence from parents in certain areas of life and also used to support intimate relations. None of this would be possible without chemistry, and every time you use your cell phone, you are putting chemistry into action. Thanks to the intersection of chemistry and innovation, the possibilities are limitless.

Thank you for reading, we hope this article is helpful. If you have any questions ,please comment below.